Posted at 17:37h in Blog by Duncan McCue 0 Comments
Share
FacebookTwitter
Are there lessons for news media in Indigenous scholar Glen Coulthard’s Red Skin, White Masks? This blog was written by Sophie Woodrooffe – a freelance journalist and graduate student at the UBC School of Journalism – for a directed study course offered through the First Nations and Indigenous Studies program at UBC. The course is taught by David Gaertner and explores perspectives on storytelling, colonialism and Indigeneity in journalism and new media.  You can find Sophie’s blog here or follow her on Twitter @dswdrff.
Politics of Recognition, Mediated

I’d like to start this post with a question: What are the implications of the thesis Glen Coulthard offers in Red Skin, White Masks for mainstream news media?

I ask because, as a settler journalist, I seek to understand the ethical implications of my line of business.

My aim here, is to look at the viability of bringing Coulthard’s critique of the politics of recognition into dialogue with media ethics in a Canadian context—in a way that tarries with the facts at hand, and which Coulthard lays out plainly in his book, namely, that Canadian statehood finds its legitimacy in the continued work of dispossession. 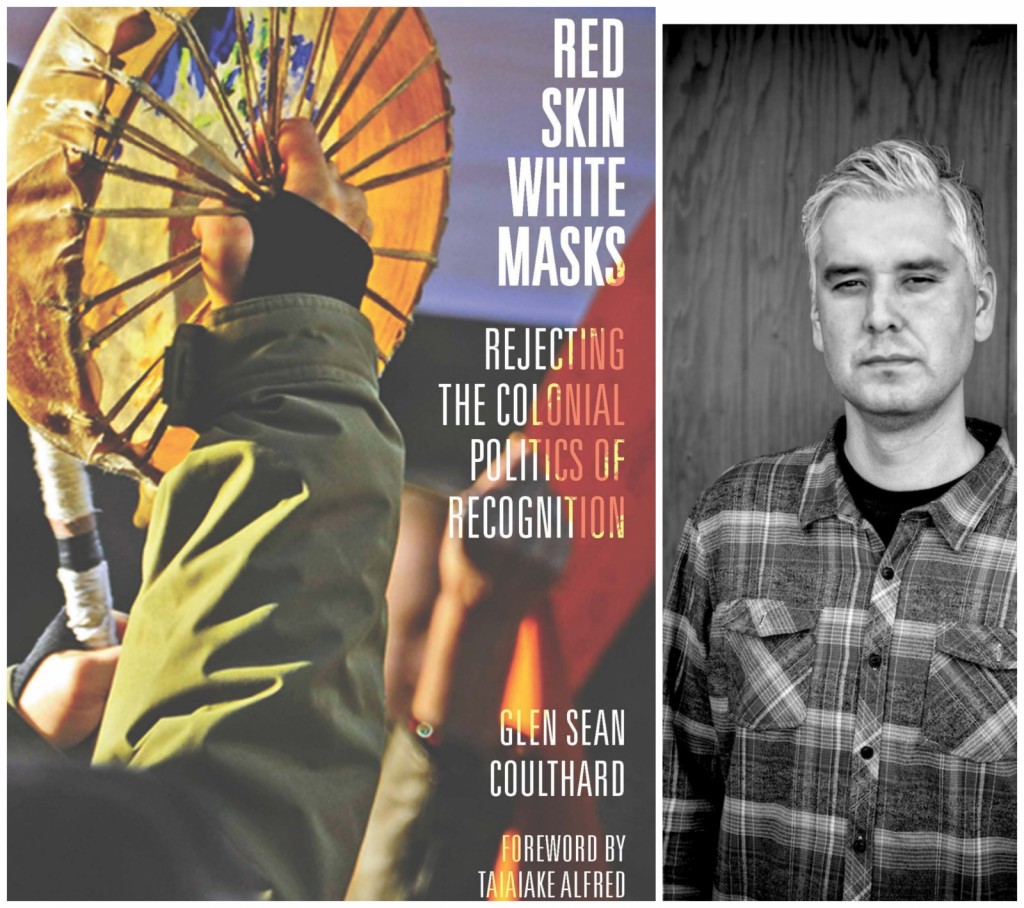 As Coulthard writes in the conclusion of Red Skin, White Masks, colonialism “is an ongoing practice of dispossession that never ceases to structure capitalist and colonial social relations in the present. Settler colonialism is territorially acquisitive in perpetuity” (150-51).

Applying this premise to the domain of mainstream media requires that we consider the political mechanics of journalism. Questions about the role of Canadian media in serving colonial ends, even as it defines itself as an ostensible antagonist of the state, are fraught. They are fraught because journalism is not by matter of course asked to contend with its own origins, origins which are resolutely colonial and, as Coulthard puts it, “territorially acquisitive.”

Nevertheless, They are questions that ought to be asked precisely because of the reciprocal nature of the relationship between mainstream media and the Canadian nation-state. In many ways, mainstream media, by adopting values of “objectivity” and by leaning on funding from advertising and taxation, operates as an extension of the state and an apologist of the politics of recognition that Coulthard so vehemently opposes.

Coulthard provides a much needed articulation of the insidious aspects of the politics of recognition in Red Skin, White Masks. With the help of Frantz Fanon, he delivers a knockdown argument against state-derived impositions of reconciliation. He defines the term for us in the introduction:

“I take “politics of recognition” to refer to the now expansive range of recognition-based models of liberal pluralism that seek to “reconcile” Indigenous assertions of nationhood with settlerstate sovereignty via the accommodation of Indigenous identity claims in some form of renewed legal and political relationship with the Canadian state” (9).

What the politics of recognition fails to consider, he contends, is the asymmetrical power dynamic inherent in the settler-subaltern relationship, which results in the “very configurations of colonialist, racist, patriarchal state power that Indigenous peoples’ demands for recognition have historically sought to transcend” (9). This is because, as he explains via Fanon, “when delegated exchanges of recognition occur in real world contexts of domination the terms of accommodation usually end up being determined by and in the interests of the hegemonic partner in the relationship” (17).

Mainstream media often touts this same inconspicuous rhetoric. The facts of dispossession, which Coulthard so clearly lays out in his book, are rarely taken into account by mainstream news outlets. The most recent and tragic example of the La Loche shootings, does very little to counteract this tendency.

La Loche “is a community with high levels of unemployment and addiction to drugs and alcohol and a reputation as a tough town,” according to one New York Times article. Pieces in The Globe and Mail and National Post provide ample evidence of the community’s struggle with drug abuse and disproportionately high youth suicide rates, but historical and social causes are glossed over or omitted entirely.

Still, outlets have also provided sympathetic coverage that provides a more nuanced account of the tragedy. One piece in the Toronto Star, which covers the arrival of Justin Trudeau to the town after the shooting, remarks on Trudeau’s lack of commitment to residents’ request for funding to improve education, infrastructure and housing in the community. The National Post piece quotes Leonard Montgrand, executive director of the La Loche Friendship Centre, who voices his concern that reporters visit La Loche only when tragedy strikes: “People out there think our community is this evil, horrible place to live in. It’s not like that.” (See also Seeing Red, by Mark Cronlund Anderson and Carmen L. Robertson for an exhaustive account of the role mainstream media has played in perpetuating racial stereotypes in Indigenous news coverage.)

Still, the problem runs deeper than a lack of context and it can’t be resolved with a few mollifying paragraphs tacked to the end of a news article. The problem, I think, is structural. These media entities are by their very nature invested in the socio-economic status quo. This may or may not overtly influence the way in which a reporter frames a story, but blindness to the consequences of historically founded and continued perpetuation of colonial narratives speaks to a kind of latent acceptance of the colonial framework – one which mainstream journalism at its core and as an inherently sceptical profession, ought to contest.

So why doesn’t it? I would venture to suggest that the prioritization of the objectivity norm ends up serving the hegemonic discourse over counter-narratives that may be accurate and representative of diverse perspectives. As Donna Haraway suggests in her seminal work, “Situated Knowledges: The Science Question in Feminism and the Privilege of Partial Perspective,” objectivity acts as a kind of unspecified and unsituated gloss – a gaze from nowhere – and it serves dangerous ends: “This is the gaze… that makes the unmarked category claim the power to see and not be seen, to represent while escaping representation” (1988, 581).

And so, we find ourselves back at the question of the role of journalism and media in the complex account of Indigenous-settler relations offered in Red Skin, White Masks. Coulthard scatters a few references to the role that media has played in shaping this relationship throughout the book. He directly analyzes how media portrayed the Idle No More movement and the Oka Crisis. Both events represent political turning points, when Indigenous groups define for themselves and in the media, the terms of engagement, often to the chagrin of mainstream media journalists who seek to stamp these events with some unifying narrative that inevitably falls in line with the predominating colonial discourse. In the case of Idle No More, he cites a few haphazard attempts by mainstream journalists at identifying the “problem” with the movement in its lack of focus. In the case of the Oka crisis, he notes how corporate media overwhelmingly portrays events “as a “law and order”” (116).

It seems, then, that a double-bind emerges from Coulthard’s framework: journalists must act as adversaries of the state while depending on the colonial, capitalist patriarchy that undergirds and legitimates the industry.

But the paradox presents little in the way of optimism, nor does it guide a way out of this structural problem.

So where do we go from here?

Coulthard, in introducing a radical turn away from politics of recognition, and sketching out the means for doing so in his concluding chapter, offers clues.

In the conclusion of Red Skin, White Masks, Coulthard provides some introductory thoughts on Indigenous resurgence. Rather than looking to Fanon to guide his thinking (who de-emphasizes cultural revival in favour of “the new”), Coulthard turns to political scientist Taiaiake Alfred (Mohawk) and feminist Leanne Betasamosake Simpson (Anishinaabe), who offer up alternative means of relating to the colonial-settler framework and more importantly, fashion signposts for conceiving an Indigenous resurgent politic.

Coulthard introduces Alfred’s notion of “self-conscious traditionalism,” which suggests that Indigenous people must “choose to turn away from the legacies of colonialism…and take on the challenge of creating a new reality for ourselves and for our people” (154). Likewise, according to Coulthard, Simpson suggests Indigenous people “need to decolonize “on our own terms, without the sanction, permission or engagement of the state, western theory or the opinions of Canadians”” (154).

As with Coulthard, both Alfred and Simpson push back on the notion of institutionalized reconciliation. Ultimately, so long as the settler-colonial power structure remains in place, so too will a power imbalance that will always pre-figure the state’s attempts to establish rights and apologize for past wrongdoings. There is no “righting” historical “wrongs” because these wrongs persist today, and because these efforts ultimately serve the ends of the Canadian government while preserving a relationship of dispossession. One need look no further than the recent Human Rights Tribunal decision regarding First Nations children to observe the ongoing fallout of this power imbalance.

What, then, can provide an effective alternative? The countermeasure is Indigenous resurgence — cultivating and promoting cultural revival. Both thinkers, however, suggest that embracing historical traditions and values requires a degree of critical reflection. As Coulthard explains: The resurgence Alfred and Simpson advocate is thus a critical one: an intellectual, social, political, and artistic movement geared toward the self-reflective revitalization of those “values, principles and other cultural elements that are best suited to the larger contemporary political and economic reality” (156-7). Coulthard delivers five theses for conceiving of a politics of self-recognition that take into account Simpson and Alfred’s approach, but the most relevant to the purposes of this discussion, is the first: On the Necessity of Direct Action.

Direct action for Coulthard, must be prefigurative, in that these actions “build the skills and social relationships (including those with the land) that are required within and among Indigenous communities to construct alternatives to the colonial relationship in the long run” (166). He also defines direct action as being “directly undertaken by the subjects of colonial oppression themselves,” and “in a way that indicates a loosening of internalized colonialism” (166).

If we are to grant that mainstream media, thanks to its reliance on the problematic objectivity principle and its dependency on the status quo of the nation-state in its present form, perhaps we can consider Indigenous independent media as a way of counteracting this discourse. The work of âpihtawikosisân, Maureen GooGoo’s Kukuwes and the call by Anishinaabe reporter Duncan McCue to fight to resist “colonial amnesia” in the newsroom, for example, offer narratives that aggressively question the latent power structure at play in mainstream media production.

But turning away from state-sanctioned corporate media and towards grassroots Indigenous alternatives elides the responsibility of those media-makers who find themselves employed by these outlets, especially settler journalists who profit from this power imbalance, even if they reject it. It also neglects the role that Indigenous media-makers play in seeking a way out of the dominant discourse.

Taiaiake Alfred, in speaking about how Indigenous students and scholars might reconcile their roles within the colonial academic institution says, “you can carve out spaces… there are cracks you can inhabit and live in there until they close up and then move on. This idea of impermanency is important…” Perhaps his words ring true in the context of media, also.

Media occupies a unique position: it requires a theoretical framework, however latent, to do its work. The journalist as storyteller must embrace the incontestable fact that theory pervades storytelling, and that in telling a story, journalists perform. Decolonizing mainstream media may perhaps be a contradiction in terms, but it also provides a way to think about mobilizing mainstream publics to demand better journalism.