Searching for Solutions to “the Indian Problem”

Excessive emphasis on the Indian problem to the exclusion of positive dimensions has the effect of framing Aboriginal people as a problem people… Aboriginal peoples are not a problem but peoples whose lives are complicated by forces beyond their control.
–    Augie Fleras

How many stories about Aboriginal peoples start this way?

Study after study gets released, listing these mind-numbing statistics, and journalists dutifully report them, to offer context to the shameful living conditions facing Aboriginal peoples in Canada.

Why do we repeat those statistics? Because, we witness evidence of them. Up close and personal. We travel to the reserves, full of rotten houses and lousy drinking water. We drive by Aboriginal people in the inner city, struggling with drug problems.

Do the bleak statistics paint a full-picture of Aboriginal life in Canada? Of course not. Ill-health, lack of education and poor job prospects are not the sum total of Aboriginal experience.

However, if that’s all the media report, it’s easy to see why our viewers and readers might develop that opinion. When the media repeatedly focus on problems in Aboriginal communities, we send an underlying message to our audience: Aboriginal peoples are problem peoples.

Should a reporter pretend those troubling statistics don’t exist? Only tell stories about happy, proud, wealthy, healthy Indians? No — that’s not a true picture either. Aboriginal communities face a host of socio-economic crises, and these stories need to be told. These aren’t just numbers to Aboriginal people: they are grannies and grandpas, sisters and brothers, mothers and fathers. 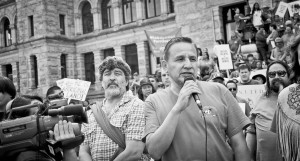 If muckraking asks “what went wrong yesterday, and who is to blame?” then future-focused journalism asks “what might go right tomorrow and who is showing the way?”
– David Beers

Solutions-oriented journalism, future-focused journalism, development journalism, catalytic journalism. Call it what you like. The key tenet of this approach is for journalists to look for constructive, solution-oriented activities, that inform, intrigue, and inspire an audience.

Because, for every problem faced by an Aboriginal community, there’s likely an Indigenous community somewhere out there (in the province, the country or in other countries) that’s working toward — or has found — a way to resolve that challenge.

Journalists, with our expertise in research and communication, are well equipped to share and promote possible alternatives, by reporting firsthand on experiments, sharing data, and involving audiences in dialogue and debate. 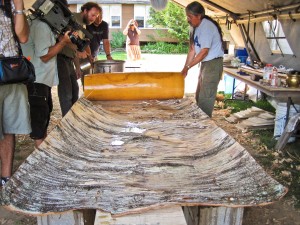 Old-school journalists may poo-poo this approach, calling it “advocacy journalism.” But is it advocacy – to look for common interests shared by Aboriginal peoples and the rest of Canada?

Instead of creating a sense of desolation and despair about Aboriginal communities, solutions-oriented journalism can give viewers and readers a sense of hope. As David Beers, the founder of a solutions-oriented online news publication called The Tyee, says, “when editors do green-light those stories, the results allow citizens to imagine and debate alternative futures, and to mobilize support for the versions they support.”

Reporting solutions, rather than problems, is complicated. Solutions are rarely simple, and rarely happen during a 24-hour news cycle. In short, you may need more time. But fight for that time, by telling your senior editor or producer your story is going to make a difference.

I want to get rid of the Indian Problem…
– Duncan Campbell Scott, Deputy Supt. Of Indian Affairs, 1920

Oh, the “Indian problem.” Entire departments of missionaries, Mounties and Indian agents (not to mention, many an editorial writer) have asked, “Why won’t those Indians behave like whitemen?”

Politicians and bureaucrats designed legislation and policy, particularly the Indian Act, with the express purpose of fixing the “Indian problem” by assimilating Indians. The Indian Act effectively treats Aboriginal peoples as children or wards of the state, incapable of taking on the responsibilities of the “white” world.

Always ask: what are Aboriginal people themselves doing to try to solve the problem?

The Indian Act condemned generations of Aboriginal peoples to a state of dependence.

Always ask: what are Aboriginal people themselves doing to try to solve the problem? 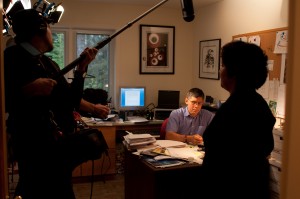 Ask Aboriginal leaders what steps they’re taking to solve their community’s problems. Ask community members what they think the solutions might be. If your story includes Aboriginal people as problem solvers, you’ll be helping transform Aboriginal-as-victim narratives into stories of self-reliance and self-determination.

Previous: Positive and Negative Stories
Next: How to Get Stories Assigned