There were a lot of adjectives attributed to Native people. Lacking among them was funny. Savage irony and morbid humour did sometimes enter the picture as a kind of self-flagellation device for whites, but on the whole, Natives were treated by almost everyone with the utmost gravity, as if they were either too awe-inspiring as blood-curdling savages or too sacrosanct in their status of holy victim to allow any comic reactions either of them or by them.
– Margaret Atwood

That’s right… funny Indians. You got a problem with that?
– Charlie Hill 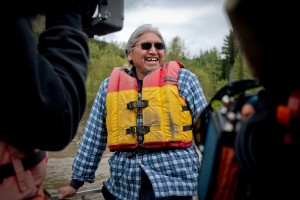 To read our newspapers or watch our news programs, one might get the impression there’s little more to Aboriginal life than desolation and misery. When Indians come on the news, who blames a reader for turning the page or a viewer for switching the channel?

Indeed, the image of Indians as tragic and stoic is so well entrenched, the title of this section may strike you as odd.

What’s so funny about Indians?

Actually, humour is an intrinsic part of life in Aboriginal communities. You’ll find your stories will improve if you employ humour in the field. Heck — go crazy! Maybe even include some humour in your story!

Humour in The News

Before discussing Indian humour, a quick word to journalists who consider it sacrilege to use humour in news stories.

Canadians flock in great numbers to political satire shows – such as The Rick Mercer Report, or This Hour Has 22 Minutes, or American programs such as The Colbert Report, and The Daily Show with Jon Stewart – and that should be an indication to every journalist that we need to lighten up. Reporters or anchors don’t need to start cracking one-liners, but we need to consider how our audience is increasingly looking to satire and drama as a way to engage in political debate. Furthermore, if we’re going to fully use mediums such as television to their fullest, humour is but one more powerful arrow in a storyteller’s quiver.

When it comes to using humour in stories on Aboriginal issues, news outlets don’t need to go so far as the comedic observations of Joe Crow, This Hour Has 22 Minutes’ soft-spoken but hard-hitting “Aboriginal” correspondent. But, how hard is it to include an Aboriginal person smiling or laughing in a news story every once and awhile?

Understanding Indian Humour and Using It in the Field

In one of our discussions on Native humour, Thomas King and I considered that Heisenberg’s uncertainty principle might apply here. It was Heisenberg’s belief that the art of observing alters the reality being observed. Maybe putting Native humour under the microscope changes its effects or impact. I don’t know. I was always weak in physics.
– Drew Hayden Taylor

Let’s not second-guess authors Drew Hayden Taylor and Thomas King, who have funny down to a fine art, and let’s not try to define Aboriginal humour. If you haven’t experienced it, you’ll have to take it for granted – Indians, Inuit, Metis – they all love to laugh. Different tribes have different humour, but there are a couple of universal factors in Aboriginal humour: teasing and self-deprecation.

If you can laugh at yourself — even better, make fun of yourself — Aboriginal people will warm to you more quickly.

Theories abound on why Aboriginal folks take such pleasure in taking each other down a notch. Mohawk psychiatrist Dr. Clare Brant related it to efforts of small, family-based groups to maintain social harmony. Back in the day, keeping good humour was a way to defuse tensions – critical to group survival in a harsh environment.

Sioux author and philosopher Vine Deloria Jr. had his own take on the importance of teasing in Aboriginal communities, in Custer Died For Your Sins:

Rather than embarrass members of the tribe publicly, people used to tease individuals they considered out of step with the consensus of tribal opinion. In this way, egos were preserved and disputes within the tribe… were held to a minimum.

If someone in an Aboriginal community teases you, even if it seems harsh, it may be intended as a sign of acceptance. If you can laugh at yourself — even better, make fun of yourself — Aboriginal people will warm to you more quickly. Especially if you’re white — Indians love white people jokes (like the one about the John Wayne toilet paper).

(If you don’t know the one about the John Wayne toilet paper, I’m sorry. Really. I am. But, I’m not going to tell it here. Ask an Indian.)

If the news you’re covering is serious or tragic, it’s still worth quietly observing the community, to see whether humour may play a part in your story. A quote or a scene of a character laughing in the face of grave circumstances speaks volumes to an audience, helping to illustrate how Aboriginal people use humour as a coping strategy or perhaps as a subversive survival tactic.

Indian Humour In Your Story

If you list your probation officer as a reference, you might just be a redskin.
– Don Burnstick

Do be careful about your use of Indian humour in news stories. If you read the fine print on Indian jokes, it says: “humour may cause offense, if not used wisely.”

Journalists are not comedians, and our audiences don’t expect the news to be a yuck-fest. Being funny, or even mildly amusing, is not a skill easily learned. It may take time for a storyteller’s personality and voice to evolve, before incorporating humour into the news.

If you read the fine print on Indian jokes, it says: “humour may cause offense, if not used wisely.”

Furthermore, if you head to the rez hunting for a story that plays like a stand-up comic routine, you’re unlikely to find it. Some Aboriginal people joke more than others. In some situations, humour isn’t appropriate.

Still, any observant reporter visiting an Aboriginal community will find herself surrounded by Indian humour. Here’s two tips on how to escape that dreadfully stereotypical image of the stoic and tragic Indian.

Previous: Storytakers
Next: On the Air