It’s 9 AM. The assignment editor hands you a press release. Funding announcement by the Minister of Aboriginal Affairs. Big money to refurbish a decrepit school at a nearby reserve. Event starts at 12 PM. You grab a coffee, race to the vehicle and make the one-hour drive to the community.

You arrive at the school gym with time to spare. But the event unfolds something like this:

12:15     The event has not yet started (media is there, Minister is there, school kids are there, but thing still hasn’t started). Chief busy talking with Principal.

12:30     Ceremony starts. Principal makes introductions, including everyone on band council, school board and all the teachers.

12:40     Principal invites an Elder to bless the gathering. She speaks passionately for 20 minutes, about her traumatic experience at residential school, then prays.

The whole time, your Blackberry or cell phone is buzzing non-stop. The assignment editor wants an update – is this a story, she wonders, and what should she tell the 2:00 production meeting? The news service wonders if you can do a short hit. The promo people want a piece of you too.

Two hours after the initial start-time, you have your 15 second clip from the Minister of Aboriginal Affairs — but you still have to gather interviews from community members and drive back to the city to edit the piece. 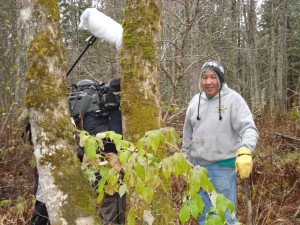 It’s an enigmatic idea based on a uniquely cultural relationship with time. Simply put, things happen when they happen. There are not 24 hours in a day. Time is unlimited, impossible to cut up into chunks.

Mohawk psychiatrist Dr. Clare Brant also tried to explain Indian Time, after observing Mohawk steelworkers who sometimes appear to be “lazy” or dragging their feet — but suddenly react in a burst of energy to finish a job:

It means when the time is right… when the time, the seasons, the conditions, the feelings, the Manitou, the spirit and everything are correct, then you proceed; pull out all the stops and get the work done.

In the school press conference scenario I outlined, an anxious reporter may perceive the schedule as loosey-goosey disaster when, in fact, the introductions and speeches and performances are highly structured in terms of local manners and protocol. Process (which includes honouring people) is considered as important as the product or result. It’s part of how things are done in “a good way,” or “the right way.”

Make no mistake: Indian Time is not Newsroom Time. You have a deadline, and you need to fill a hole in a lineup with material — and Indian Time is likely going to be an obstacle.

Here are some ways to tackle it.

Build in extra time to YOUR schedule, to allow for events to be delayed, interviewees to be late, or for the appropriate introductions to be made. If this is not a “today” story, start your research sooner rather than later, to allow time for First Nation communities to discuss the story, and who would be appropriate to interview.

On the day of a shoot, if you need to book a cameraman or a photographer, ask for extra time, before and after. Put in an overtime request, if that helps. Do your best not to squeeze a lot of interviews into a small period of time. Allow for the all-important cup of tea.

Explain to your assignment editor that it may take twice as long to get your work accomplished in an Aboriginal community – and if she can cut you some slack (whether extending research time, or pushing your deadline), the story will be a lot better. 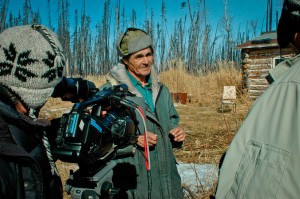 Indian Time, especially when it relates to excursions on the land, does not always mean “running late” or things take longer. Things happen when they happen, and sometimes that means EARLIER than planned. If the origins of Indian Time hearken back to an age when Aboriginal peoples’ activities revolved around the seasons, the sun, and the migratory patterns of animals (though who really knows what the origins of Indian Time are), then allowances must always be made for changes to your plans.

So, if you’re set up to go out in a boat at 8 AM to film your character fishing, you may find him knocking on your door at 4 AM, if — a) weather patterns, b) the behaviour of the fish, c) the advice of an elder, or d) all of the above — dictate an earlier departure.

Not ALL Indians run on Indian Time.

Some days, YOU might be running late, thanks to a traffic jam, or that senior editor who took forever to sign off on the item. “It’s okay if I’m late,” you say to yourself. “It’s an Aboriginal story – they’ll understand. They’re on Indian Time.” Maybe yes, maybe no.

Aboriginal people are just as busy as anyone else in this fast-paced world, and many have hectic and demanding schedules. You run the risk of offending someone, or worse – losing an interview – if you don’t show up or call at the agreed-upon time.

Treat Aboriginal folks the same as you would anyone else – if you’re running late, make a quick call to advise them, and apologize.

If your story happens to fall on a day when the salmon are running, or there is a funeral for an elder, or one of many other types of significant cultural events that occur in Aboriginal communities (such as hunting, gathering, harvesting, spiritual ceremonies, funerals, births, or family gatherings), you may find it difficult to get a hold of anyone.

That doesn’t necessarily mean the person you’re trying to contact doesn’t want to talk to you. It does mean they have different priorities than you.

Your deadline is your problem.

You may wish the rest of the world understood how important it is for you to make your deadline, and perhaps, if you explain your deadline, the Aboriginal folks you’re dealing with will bend over backwards to help. But, you will likely win respect – and may wind up with a bigger and better story – if you try to forget your deadline (as difficult as that is) and recognize it often takes a little longer to do things in Indian Country.

Instead of thinking of Indian Time as a reporter’s worst enemy, why not think of it as a friend?

Instead of thinking of Indian Time as a reporter’s worst enemy, why not think of it as a friend? If you’re successful in getting your editors to understand that your story will take a little longer but it will be worth it, your story is only going to improve. Use the time to do research and develop story leads. What reporter doesn’t want MORE time to work on a story?

What if your assignment editor wants a story, come hell or high water? Well, maybe you try to find a different story, that you know you can deliver on – and put this one and the contacts you’ve made in your story bank. Or maybe you’re stuck – and you just file the story with what you can get. But, if all you wind up with is wide shots of the reserve and file footage, don’t blame the Indians.

Previous: In The Field
Next: Aboriginal Customs and Protocols