VIDEO Seeing Each Other: The role of media & Indigenous voices in reshaping relationships

30 Jul VIDEO Seeing Each Other: The role of media & Indigenous voices in reshaping relationships

Why did a Letter to the Editor in a small-town newspaper prompt angry local protest, and cries of ‘Racism’ from across North America — and what are media doing to improve coverage of Indigenous peoples?

Those were the important questions tackled by a distinguished panel of guest speakers, who gathered in January 2014, as part of Vancouver Island University’s commitment to Nanaimo’s “Racism to Reconciliation” process.

The view from the stage at VIU

RIIC was part of the discussion, about the role media plays in shaping the relationship between Indigenous and non-Indigenous peoples. The panel included then AFN National Chief and VIU Chancellor Shawn A-in-chut Atleo, musician and broadcaster Wab Kinew; Judith Lavoie, freelance journalist; comedian and AFN press person Don Kelly; and me.

Here’s my talk, excerpted from the full discussion:

But, if you want to watch the full Ka Na Ta Conversation (worth watching – much of the evening was spent fielding great questions from the livestream audience), you can see it here:

Here’s some media coverage of the Seeing Each Other event:

Does an aboriginal Canadian need to be “drunk, dead, drumming or dancing” to make the news?, J-source 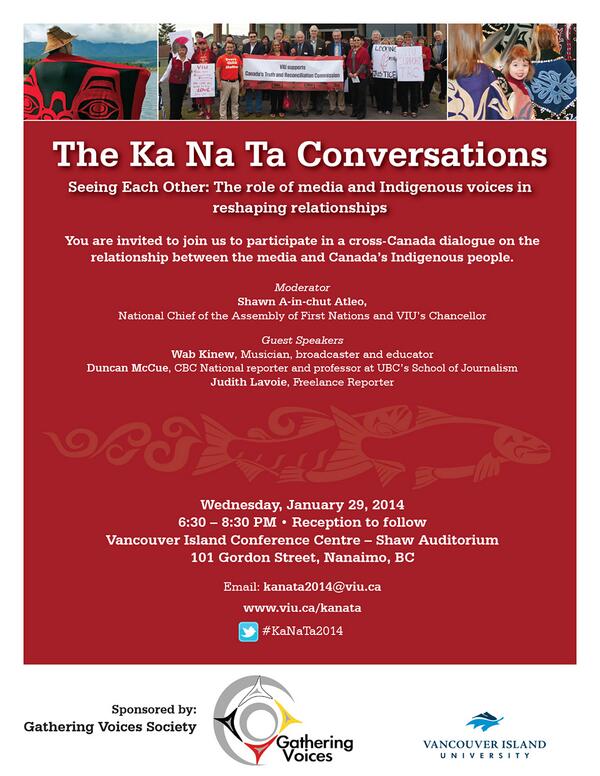