The myth of the drunken Indian has been retired in favour of the legend of the crooked band council.
–    Stephen Hume

An elder once told me the only way an Indian would make it on the news is if he or she was one of the 4Ds: drumming, dancing, drunk, or dead.

C’mon, I said, that’s simplistic. I can show you all kinds of different news stories — about Indigenous workers running a forestry operation, an Indigenous student winning a scholarship or an Indigenous group repatriating a sacred artifact.

But, then I started looking more closely at Indigenous people in the news. Those 4Ds sure do show up an awful lot (if that repatriation event has some drumming and dancing goin’ on, the reporter is bound to squeeze both into the story).

In fact, if you take that elder’s four “Ds,” and add a “W” for Warrior, you could make it a rule.

The WD4 Rule on How Indians Make The News

It’s a photo so iconic it has a title. “Face to Face.” A baby-faced soldier staring down a masked warrior.

Shaney Komulainen’s snapshot during the Oka Crisis in 1990 so perfectly captured longstanding racial and national tensions that The Beaver magazine named it one of the top five News Photos That Changed Canada.

But consider a different photo, also captured during the Oka Crisis, one that doesn’t have a title. Maybe it should. “Media Circus.” 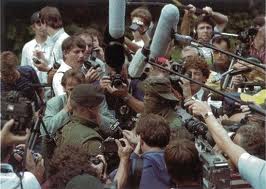 It is equally telling, about how media actively shape perceptions about confrontation and conflict between Canada and Indigenous Peoples.

Why does direct action by Indigenous groups (such as marches, blockades, or occupations) receive disproportionate attention from news media? Yes, protests often meet the test of whether a story is “newsworthy,” because they’re unusual, dramatic, or involve conflict. Yes, Indigenous activists, who understand the media’s hunger for drama, also play a role by tailoring protests in ways that guarantee prominent headlines and lead stories.

But, does today’s front-page news of some traffic disruption in the name of Indigenous land rights actually have it’s roots in a much older narrative – of violent and “uncivilized” Indians who represent a threat to “progress” in Canada? Are attitudes of distrust and fear underlying our decisions to dispatch a crew to the latest Indigenous blockade? Is there no iconic photo of reconcilation, because no one from the newsrooms believes harmony between Indigenous Peoples and settlers is “newsworthy”?

It’s easy to laugh, these days, at those ridiculous Hollywood Indian stereotypes of yesteryear: Indians wearing feathers, grunting in monosyllables, “circling the wagons”. But contemporary news stories continue to reproduce the mainstay of those old Westerns – the Indian drums. 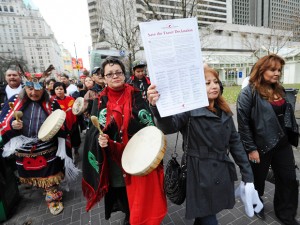 Well, how many broadcast news stories start with Indigenous drumming? Reporters seem entranced by those drums, whether they be Indigenous protests or Indigenous celebrations (if there’s no drums around, heaven forbid, then hurry up and find some flute music for the background track!)

Sure, I get it. You need sound and action to start your piece with a kick.

But do you ask the purpose and meaning of the song? Is it an honour song, a prayer song, a memorial song? Do you request a translation of the lyrics, or describe it as “chanting?” Or do you just let those frozen-in-time Indians beat their drums, leaving it to your audience to interpret (I bet many heave a mighty sigh, “Oh, drums. Indians on the warpath. What do they want THIS TIME?”) 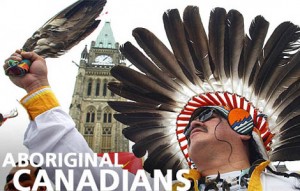 The dancing thing goes hand-in-hand with drumming. Indians in traditional regalia fit a popular but superficial interpretation of Canadian multiculturalism. Please, share your entertaining costumes and dances and, yes, we’d love to taste your exotic food!

Actually, Indians outfitted in buckskin and feathers (whether real Indians like Pauline Johnson or fake Indians like Grey Owl) have long been objects of fascination and even admiration. 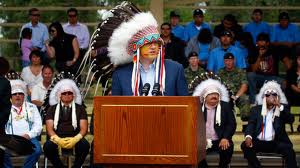 To many Canadians, an Indigenous person wearing a button blanket or beaded vest represents a bygone era. Dressed-up Indians are benign, without all those messy contemporary problems – suicides and land claims, mouldy houses and tax exemption.

Newsrooms are not immune to this nostalgia for “Indians.” Why are chiefs so often portrayed wearing traditional regalia (rather than dashing through airports, barking into cellphones?) How many TV newscasts use an over-the-shoulder graphic of a feather to signify an “Indian” story? Is it powwow time again – get a camera over there!

Trust me. If you’re an Indigenous person and you want to make the news, haul out your headdress (or give one to the Prime Minister).

No question, alcohol is at the root of many stories reporters cover in Indigenous communities – car accidents, murders, assaults, and the like. 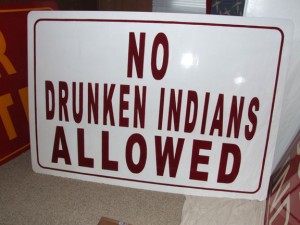 But does that age-old stereotype of the “drunken Indian” have any basis in reality?

Do the countless stories we cover about Indigenous people involving alcohol help reinforce the myth of the “drunken Indian”? Ask yourself: is alcohol relevant to the story, and why? The media often stays mum about the drinking habits of notable Canadian politicians — would alcohol be part of your story if this was about a non-Indigenous person? 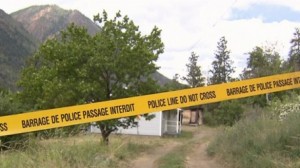 Go to news search engine such as Google News and search “dead” and “First Nations” (or synonyms such as “native” or “Indigenous”). I’ll bet my grandmother’s dreamcatcher your cup overfloweth with news from across the country.

Newsrooms have this thing for death, anywhere its happening. “It bleeds, it leads,” right? Sadly, in Canada, there’s a disproportionate amount of death happening in Indigenous communities. Maybe that explains why we see so many dead Indians in the news.

But, what does this constant barrage of dead Indians tell our audiences about Indigenous communities in Canada? That Indigenous life in Canada is, to quote Thomas Hobbes and one infamous judge in British Columbia, “nasty, brutish and short”? Or, nefariously, that “the only good Indian is a dead Indian”?

OK, I admit, I’m trying to stir the pot with the WD4 Rule. Still, research shows news reports from Indigenous communities tend to follow extremely narrow guidelines based on pre-existing stereotypes of Indians.

But, first, let’s take a step back and ask — what is a stereotype anyway?

Whether we’re aware of it or not, reporters use stereotypes. A lot. News happens fast, and we need quick ways to simplify our storylines to make sure our audience “gets it.” 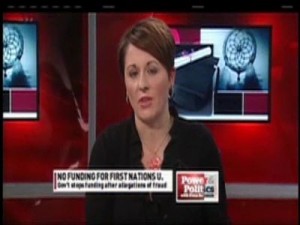 Stereotypes act like codes, giving audiences an instant, common understanding of a person or group of people—usually relating to their class, ethnicity or race, gender, sexual orientation, social role or occupation (for example, “NHL hockey players have physical stamina” is a safe assumption, even if it’s not based on statistical fact).

Stereotypes of Indigenous Peoples in the media tend to shift, depending on the concerns of the age. In fact, there’s evidence the WD4 Rule is being replaced by more complex, more refined stereotypes.

In 1996, when the Royal Commission on Aboriginal Peoples examined representations of Indigenous Peoples in the media, they concluded many Canadians know Indigenous people only as the Pathetic Victim, the Nobel Environmentalist, or the Angry Warrior:

Indigenous people are portrayed in a historical past reconstructed in present stereotypes: the noble Red Man roaming free in the forest; the bloodthirsty savage attacking the colony or the wagon train; the drunken Indian; the Indigenous environmentalist; and, most recently, the warrior in para-military dress, wielding a gun… As with all stereotypes, there is a kernel of truth in the images, which assume a dramatic profile and become etched in the popular consciousness. But stereotypes block out complexity of context and diversity of personality and perspective.

In 2002, Crystal Maslin used her Master’s thesis to examine how Saskatchewan newspapers have constructed portrayals of Indigenous Peoples, identifying two used most frequently: 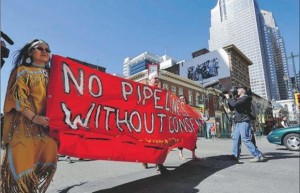 In 2005, Robert Harding, a social work professor, found the “native-as-environmentalist” stereotype is waning, while a new stereotype is emerging: Indigenous people as “incompetent or corrupt financial managers.” Harding suggests this pattern of news discourse “protects the status quo while limiting the potential for Indigenous self-determination.” While self-governance may be the ultimate goal for many Indigenous Peoples, Harding wrote “others may see these aspirations primarily in terms of the threat they pose to their lifestyle and standard of living.”

There are many other ways media “frame” news stories about Indigenous Peoples, and there are certainly regional variations (for example, “native-as-gangster” news stories abound in the Prairies, just as “casino-rich Indians” stories are common in the United States). I’ve highlighted some here; if you’re interested in more detailed analysis, check out the References section.

Not to further complicate matters, but as you journey to Indigenous communities, you may find Indigenous people sometimes encourage, expand and even exploit the stereotypes. How many Indigenous baseball teams are called the Braves, or Indigenous hockey teams dubbed the Chiefs? What’s a reporter supposed to make of that, huh?

Here’s the bottom-line: as journalists, our first obligation is to the truth. We need to convey accurate facts in context. That means, when covering Indigenous communities, we need to resist the shortcut of stereotypes.

Be conscious of your own personal and cultural biases. Verify the information you report. Otherwise, you risk undermining the accuracy of your work, and adding fuel to the fire of existing stereotypes.