On Reconciliation and the Canadian Media 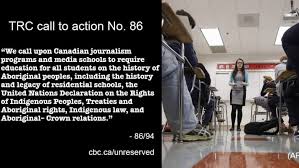 18 Dec On Reconciliation and the Canadian Media

Where are Canadian media at, when it comes to reconciliation with Indigenous peoples?

In October 2020, I had a lengthy conversation with Maia Herriot of The Pigeon about how newsrooms and journalism schools have responded to the Truth and Reconciliation Commission’s (TRC) calls to action related to Canadian media.

You can see Maia’s story here, but what follows is a full transcript of that discussion.

Maia So when the TRC media call came out you had already worked on that Stanford guide to improve the way journalists reported on Indigenous issues and you’d already worked with CBC for- yeah, you were over a decade into your career. So how did the call to media resonate with you when it came out?

Duncan I was incredibly pleased to see that the TRC devoted three of its calls to action to media, because I think that the commission recognized the critical importance that media plays in forming opinion in Canada and the need for the media to not simply report on reconciliation, but to recognize that the media aren’t at arm’s length from reconciliation and all that entails. What the TRC was pointing out in its research and in its calls to action was that the media, unfortunately, has its own history of misrepresentation of Indigenous peoples that it needs to atone for and change. So I was very pleased to see that that the TRC was insisting that newsrooms in this country need to take a hard look at the kind of coverage of Indigenous communities that they have provided in the past and start to take steps towards changing those portrayals.

Maia There’s been more and more coverage of Indigenous land disputes and settler treaty violations in recent years here, even just this month. When you read the coverage, are you satisfied with the way Indigenous issues are being reported on?

Duncan I think it’s the same over and over again. What we see is that reporters, unfortunately, don’t have the kind of understanding of Canadian history and certainly don’t have an understanding of Indigenous history to be able to report fulsomely, if that’s a word, on this topic. In the case that you’re referring to, with regard to the Mi’kmaq lobster fisheries, we’ve seen that unfortunately, many media outlets have not done a great job of understanding the treaties that are underpinning some of that dispute and don’t seem to understand or recollect the Supreme Court of Canada decisions with regard to Mi’kmaq fisheries. So that’s frustrating when our news audiences aren’t given that kind of historical context. Then it makes these kinds of disputes seem as if the Indigenous people that are involved in the disputes are problems, are problematic people. Our news audiences need to have that historical context to be able to understand what’s going on in these land disputes or water disputes fully.

Maia You’ve done work to try to address that issue at the head with Ryerson and UBC, working with those journalism programs for better education on Indigenous issues. Can you talk a bit about your work with those programs? And was that in response to the TRC’s call to journalism schools?

Duncan The work at UBC certainly began before the TRC. We began teaching a course called Reporting in Indigenous Communities in 2011 — so four years before the TRC —because we recognized that every journalism student who is going to work in a Canadian newsroom needs to have a basic understanding of Indigenous issues in this country. To not provide journalism students with a cultural competency when it comes to Indigenous issues and to send them off to newsrooms with a diploma is a little bit akin to not teaching them how to write a lede or how to white balance a camera. I argue that it is absolutely essential that all journalism students should have some kind of exposure to Indigenous history, to Indigenous culture and protocols, Indigenous politics, if they are going to be a well-rounded journalist in Canada. Whether or not they’re going to go and work the “Indigenous beat.” I don’t expect that. The students will have their own interests journalistically that they want to pursue, whether that’s business or health, sports or arts, whatever it may be. But in this country, they are going to encounter Indigenous people throughout their career and we have seen over and over again the impacts of journalists who don’t have a cultural competency, who don’t feel confident or well-informed when it comes to Indigenous issues, and the kinds of misrepresentations that end up in our news stories as a result of that.

Maia Do you think there are still significant barriers to young Indigenous people becoming journalists?

Duncan Yes, there’s lots. If you look at the Journalism for Human Rights ‘Emerging Voices’ report, it does a good job of studying some of the barriers that Indigenous high school students in northern Ontario perceive to going to journalism school. There are plenty of young Indigenous people who wish to become journalists – which is outstanding – but there are barriers with regard to funding, there are barriers with regard to moving to urban centres where they don’t feel that their culture may be supported. Unfortunately, the dropout rate and the gaps in education that many First Nations students experience continue to be barriers in terms of their achievement in post-secondary. So there are lots of barriers, and we as journalism schools need to start to make efforts to design our programs in ways that will attract Indigenous students and better serve them.

Maia Do you think part of the barrier to really doing justice to Indigenous stories or getting Indigenous voices involved in journalism is the colonial structure and expectations of journalism that are often quite rigid?

Duncan What do you mean by “colonial structure”?

Maia Things like objectivity, style of storytelling, that are so specific…

Duncan I think it’s interesting, with the George Floyd protests and Black Lives Matter marches and demonstrations that have happened throughout 2020, we’re beginning to see newsrooms re-examining that notion of objectivity and that’s an overdue conversation that unfortunately not enough newsrooms have engaged in. There’s no doubt that Indigenous journalists, Black, people of colour journalists have felt at times that the notion of objectivity has been and continues to be a strait jacket, if you will, that prohibits them from connecting themselves to their communities in their reportage. So, it’s a difficult conversation. I mean, journalistic standards and practices are important and essential. Balance, fairness, impartiality, all of those are really important aspects of mainstream journalism that separate us from people who are merely on the scene with their iPhones. But I would argue objectivity never really existed in the first place and it needs to be re-examined through the lens of not only Indigenous people, but BIPOC people for sure.

Maia Can you talk a bit about how you interpret the responsibility of being one of the only Indigenous journalists with such a widespread mainstream reach in Canadian media?

Maia You’ve done work with several journalism schools, while you’re there and with the students, you know, interacting with the future of journalism in this country, what excites you most about what you’re seeing there that maybe you didn’t see earlier in your career?

Duncan Well, you laugh when you say the future of journalism, but they are the future of journalism, and that’s what excites me. These young students at journalism schools right now are going to be reporting in a handful of years and running the newsrooms in a decade or two. And what I see now are journalism students who are better educated, certainly on Indigenous issues, than the journalism students when I was an undergraduate many, many, many moons ago. And I think they recognize that there needs to be a change, that the mainstream media haven’t done a very good job in the past, over the past century or more of interactions with Indigenous communities and Indigenous stories and they wanted to they want to see change, they want to be part of the change, they want to be the change. And that, to me, is incredibly exciting because I think they are already responding to Indigenous audiences in ways that journalists of my era perhaps have dropped the ball. So I think that is really exciting. I am worried, as I think every journalist in this country is worried about the future of journalism and how we all get paid fairly for the skills and the work that we do. And I think that is a crisis facing journalists worldwide, now, given the amount of free material that’s now available on the Internet. So I do worry about the future of how to make a living as a journalist in this country. But with regard to the reporting in Indigenous communities, I think it’s an incredibly exciting time for Indigenous and non-Indigenous journalists who are keen to start exploring those stories.

Maia Great. Well, those are all my questions. Is there anything else you’d like to say about the calls to media or your work with journalism schools?

Duncan You asked me earlier what I thought of the TRC calls to action, I will say that I think that the journalism schools in this country have done a better job of responding to the TRC than perhaps newsrooms have done. Because I have seen — back to the JHR report — there are journalism schools across the country that recognize that are aware of the TRC Call To Action #86, which calls upon journalism schools to teach students about Indigenous history and culture and politics and they are taking some steps toward delivering that content in their journalism schools. I think when you start to do a deeper dive into what kind of content they’re delivering to the students at the moment, it’s a bit of a mishmash. There needs to be work done by each and every journalism school in this country to really make sure that they don’t just check a box when it comes to the delivery of Indigenous content in their curriculum, but they do so in a thoughtful way that ensures that journalism students have an opportunity to practice and learn how to report in Indigenous communities, and get repeated opportunities to do so, not just a one-off lecture in first-year and then somehow believe that we’ve addressed Indigenous issues.