Q&A about RIIC at UBC

Today, we kicked off our brand new Reporting in Indigenous Communities (RIIC) course at the University of British Columbia (UBC) Graduate School of Journalism, with 16 students who will be covering 5 Indigenous communities in the Lower Mainland. Just ’cause RIIC is so darn excited, we thought we’d post the transcript of an interview instructor Duncan McCue did with Ryerson journalism student Marta Iwanek in December 2011, explaining the new course and how it came to be. Thanks to Marta for providing the transcript. 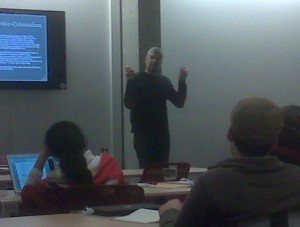 MI: I wanted to start off by asking you where the original idea came from.

DM: The idea for the course started – it’s been something I’ve wanted to do for a number of years. I’ve been an adjunct at the UBC j-school for four years now and it’s something we’ve talked about. There were some concerns expressed by my colleagues that it is a really challenging area to report in and that it would be a big challenge for our students to tackle this topic, but I have confidence in our students so that wasn’t the only issue. There were also concerns about how the relationship with First Nations communities would be ironed out. Whether as a research institution, whether First Nations communities would be expecting to have a veto essentially over material if we set up some sort of formal relationship. So we had talked about these things over the table, but it had never really gotten very far and then I had the good fortune to be last year on a fellowship at Stanford University, a John S. Knight fellowship, where I was given the opportunity to be out of the newsroom for a year and work on a project and this was one of the thing that I worked on. UBC was very supportive of the idea, they said go for it, see what you could make happen and so that’s how it started.

MI: And so how did you iron out those questions?

DM: Yeah, so the really first, the important aspect to me as an Aboriginal reporter was that we had First Nations partners. As reporters we don’t necessarily need to consent to go and do a story on First Nation issues, but again I felt it was important that we establish partners for this course and that they give input into how this thing might end up looking and so that was where I started. I talked with a number of communities in the lower mainland about the course and what we had in mind and I was really pleased at their response. They recognized the need to educate reporters about covering First Nations issues. They recognized that it would be to everyone’s advantage if reporters have a baseline cultural literacy about Aboriginal issues in Canada and so they said yeah, whatever we can do to help. So we have 5 communities in the lower mainland that have offered letters of support for this course and I’m very appreciative. It’s not something that’s a front-burner issue for a lot of Native communities – they’ve got bigger issues facing them, you know, that being journalism education, but they said yeah we’d like to be part of this and so not only are they supporting our students doing some reporting on them, on their community, but they’re going to be offering things like guest speakers. They’ve offered input into the course design and for example we’re going to be touring a band office and that kind of thing.

MI: So, the course will work – with online site as textbook and involve projects reporting on the communities?

DM: Yeah, so the key goal is that we’ve got 16 students enrolled and they’ve been assigned in teams of two to a community. We’re going to be covering one theme – all of us – health, and they’ll have to bring back a major online or television journalism project by the end of the term.

MI: And when you were talking to some of the First Nations communities what were some of their, I guess, grievances in terms of with how the media would cover them? Some of the main ones that showed up.

DM: There are lots of grievances that I hear as a reporter from First Nations folks, that I experience as a reporter. The general, the most obvious one is reporters only show up in our communities when there is bad news, when there’s tragedies. I don’t think that that’s a complaint that’s exclusive to First Nations folks. I think there are lots of people that feel that reporters are only around when there’s bad news or they’re only after conflict for example and that’s a valid critique, but it’s felt keenly by First Nations folks when the only news that they may see on the front pages is bad news. It gives the rest of Canada the impression, it may give the impression that Aboriginal people are nothing but problems, or Aboriginal people have nothing but problems that they therefore become problem people rather than kind of complex communities with good, bad and everything in between. So that’s the biggest complaint I guess that I hear from First Nations about media coverage is that it is overwhelmingly negative.

MI: And so how is this course going to help students get around that?

DM: When I’m gonna talk to them, what we’ll explore is what makes a good news story as we would in any journalism course and sometimes that involves stories of struggle, stories with conflict, stories with tension, but there are ways to make sure that our viewers and audiences don’t only see Aboriginal people as problems, which the rest of Canada needs to fix or has a responsibility to fix. And that means making sure that you interview Aboriginal people when you do stories about Aboriginal issues. It’s quite astonishing how many stories you’ll find written about Aboriginal issues which do not have any Aboriginal voices in them and so that’s a simple thing – actually go and talk to an Aboriginal person when you’re writing about an Aboriginal issue. Look for hope and solutions, rather than just focusing on the problem. See if there are solutions. A lot of our stories on Aboriginal issues focus on the problems, but it’s important to try to start the discussion about solutions and even on top of that talk to Aboriginal people about what they’re doing to try to solve these problems. That it’s not necessarily only a Department of Aboriginal Affairs representative or another government representative, who is responsible for fixing this, but that there may be Aboriginal people involved in being effective and trying to find solutions to the problems we report on.

MI: Can you give me examples of this negative coverage?

DM: There are plenty. But for this and this is where things get a little bit overlapping, but I’d point you to the portion that I write in the guide, the online guide about stereotypes and some of the common stereotypes that reporters appear in the press about Aboriginal people. And so what I said, I talk about the WD4 rule. You know warriors, drunk, dead, drumming and dancing – that’s how an Indian gets in the news. An elder told me that about the 4D’s and partly I say it, I know there’s a lot more coverage than that, but if you start to look at the media its astonishing, it continues to astonish me how many times those simple stereotypes show up in the news over and over again.

MI: And what’s the cause behind these stereotypes showing up over and over again?

DM: I think you’d have to talk to other reporters about it, but my thought is, reporting is a complex job, you know that, you know and I know that, we have not a lot of time to process information and to try to communicate it clearly to our audiences and so we don’t. Most of us don’t have the luxury of doing weeks and weeks of research to try to understand a topic before we report on it and so we fall back on what we know and what we’re able to gather really quickly and unfortunately, you know, because of the, there are a lot of lack of education I guess that some, that a lot of Canadian kids receive in school about Aboriginal issues. There are you know stereotypes and misrepresentations deeply embedded in the psyche of a lot of folks in Canada, and slowly that’s beginning to change, but reporters are no different than the rest of Canadians and so some of them have overly romantic notions of Aboriginal people, some of them have negative ones that they may have gained from you know walking downtown and seeing Aboriginal folks that are destitute. There are all kind so of reasons that Canadians including reporters don’t have the whole picture about Aboriginal people and unfortunately journalists are no different and so for the drumming and dancing examples – I think a lot of reporters have like I say – an overtly romantic notion of what it means to be an Indian.

DM: My main critique is that it took as long as it did for the media to pay attention. It was weeks. The community declared a state of emergency weeks ago and nobody listened until an MP went up with I think a flip cam and posted it on YouTube. That’s my main critique – why did it take that for newsrooms to listen and even then it was yet another week. It was social media that got this story out there – right? I’m not sure that it would still be a story if it wasn’t for YouTube and Twitter and Facebook. That’s what made this a story and so I guess my critique and my question is – why wasn’t it a story until the rest of Canada told the media that it should be a story.

MI: Why is this the only course like this in all of Canada’s journalism schools?

DM: There was a diversity course at Ryerson – right? A course on diversity in journalism which is great. In general, you won’t find much in the way of curriculum on diversity in journalism or reporting on ethnic communities or these kinds of issues and why? I don’t know. Reporters need this kind of training. This is a course in reporting on indigenous communities, but I hope some of the lessons that we’re able to tackle this next term will benefit any reporter going into any community. I happen to Aboriginal, and so  there’s a comfort level for me when I go into Aboriginal communities, but I don’t know a whole heck of a lot about Sikh culture, I don’t know a heck of a lot about Chinese culture and so I have some of these same challenges when I go into ethnic communities and I think it’s goofy for reporters to assume that those aren’t issues that we should be thinking about before we go and report on communities – not all communities are the same and we need to have a basic cultural literacy about the communities that we report on if we’re going to do a good job of trying to accurately represent the truth about those communities.

MI: How long the course took you to develop?

DM: I kind of whacked away for a year.

DM: I was working on both at same time

MI: Will the guide on the website keep changing?

DM: No, well I mean it may, it’s a blog, a glorified blog, so you know if there’s a – if I get feedback that there are things that are inaccurate or I get good ideas from other folks, I’ll incorporate that into the guide. The idea is that the guide is a living thing and it will grow and change as people contribute to it.