“Relax. Nobody is going to bite you.” 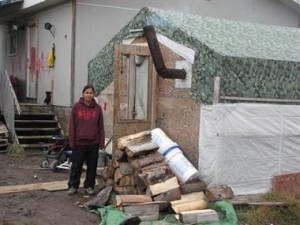 Photo credit: GlobalTV “With Attiwapiskat on the front pages, it’s an excellent time for journalists to reflect upon our Indigenous coverage.”

“Relax. Nobody is going to bite you.”

Great advice — from author and journalist Terry Glavin — on reporting in Indigenous communities, and it’s hot off the press from RIIC’s Teachings section.

Teachings is place to share the collective wisdom of journalists about reporting in Indigenous communities. You’ll find tips on what to do, and what not to do, from reporters who have been there and done that.

With Attiwapiskat front-and-centre in the news, it’s an excellent time for journalists to reflect upon our Indigenous coverage — and help each other out to make sure we get our stories right.

RIIC is less than a week old, but already, reporters are sharing invaluable insights — see some snippets below. Take a look, add a teaching – it’ll make us all better.

Keep a sense of humour about yourself, for mercy’s sake. Everybody makes mistakes based on the assumptions they carry around with them. The point of journalism is to attempt truth-telling in ways that shed subjectivity and unexamined assumption. But you (and your aboriginal interlocutors) will routinely make wrong-headed assumptions going into a story. So what? Laugh at yourself. Encourage your aboriginal interview subjects to laugh at you. It’s healthy.

– Terry Glavin, Author of A Death Feast in Dimlahamid and Nemiah: The Unconquered Country

If an elder grants you an interview, approach your discussion with the utmost respect. Too often in our line of work – especially broadcast journalism, where shorter soundbites rule – we feel the pressure to rush in and out of interviews once we have what we need for our stories…. I’ve heard of instances where journalists became frustrated with an elder when an interview didn’t unfold to their liking. As a result, the elders were deeply hurt and lost trust in the media as a whole.

– When he mentioned the Delgamuukw court case and I said “what’s that?” he called me out for my lack of knowledge on First Nations issues in B.C. I wanted to say “I’m just a grad student!” or “I’m not even from B.C.,” but I knew that wouldn’t cut it. Humbled, I looked it up after our interview was done. My interactions with this man have since been pleasant, but it was a harsh lesson that research into First Nations or Aboriginal issues should go above and beyond just the scope of your story.

Required reading before you start covering a First Nation community: the Indian Act; any judicial decisions relating to “aboriginal rights and title”: Delgamuukw, Haida vs. British Columbia, etc.; the Royal Proclamation of 1763. When you cover a First Nation, you’ll often hear conversations and proclamations that will confuse you without knowing the context. You’ll hear people talk about “extermination” or “assimilation” and think that they’re being overdramatic… The law, lambasted and dismissed as it is, must still be read and understood in order for journalists to comprehend the contexts in which conversations and negotiations are happening.

Do your research and be humble. If you’re going to a First Nations community, know a little about who they are: what do they call themselves? who is their chief councillor? hereditary chief? Don’t be afraid to say: “I hope this isn’t culturally inapproriate, I don’t want to offend, but … ” Many First Nations have a negative view about reporters, but they also want reporters to understand First Nations better, so if you show a willingness to learn, it will be acknowledged.